So good!
It definitely took some work, and once again we were referencing the recipes of both Hugh & Julia, so lots of steps–but not nearly as involved as i thought it was going to be–and so worth the effort!

Day 1-
First we checked our supplies. Reassured we had brandy, wine, stock, and salt pork on hand we made a list for our trip to the market:
We looked for an old bird (i.e a hen or cockerel) but none were to be found, instead we settled on a capon.
a ton of butter, onions, garlic, 4 tomatoes, button mushrooms.

we had also decided to pair our bird with some potato rounds (crisps) and a ‘fresh’ salad that would cut some of the fat and act as a palette cleanser.

Desert: something involving pineapple, a sweet pastry, ice cream, and homemade caramel toffy–while at the market our focus was really on the dinner so desert by necessity was a bit on the fly and a total experiment.

We followed our usual routine for making stock, but if  i were to do this again, knowing the stock is being used for coq au vin next time i will reduce the amount of salt used to season the stock. 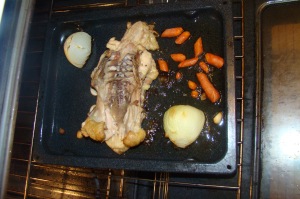 The salt pork was chopped and set aside in some cold water to desalinate.

Day 2: cooking
some butter and the salt pork fried till brown and then tossed in to a casserole. 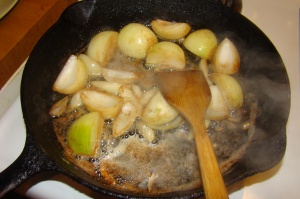 The chicken was dusted with flour and seasoning and fried in the same pan, till well browned on all sides.

Then the  brandy– added to the chicken and ignited! 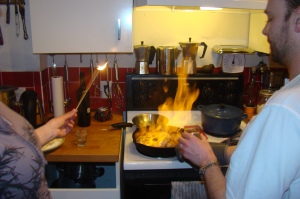 once the flames subsided, we transferred the chicken with all the delicious jus to the casserole with the pork.
the pan was then deglazed with red wine and all the bits scrapped up from the pan and still bubbling, the wine is poured into the casserole. The deglazing is repeated with the chicken stock also added to the casserole–getting any last remaining flavour left in the pan.

To the casserole we also added a boquet garni; garlic; and 4 skinned and seeded tomatoes, chopped.
brought to a simmer, covered and cooked over low heat for 1 1/2 hours.

Meanwhile I parboiled the potato slices. Once cooked ,I let them dry completely and placed them in a single layer on 2 cookie sheets. 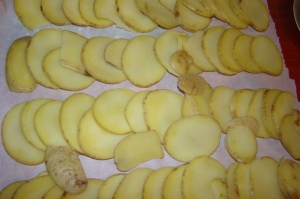 I had already made (Julia Child’s) sweet  short crust pastry dough (with the full 7 Tb of sugar!), it had been chilling in the fridge for a few hours. After reviewing Julia’s Pineapple tart recipe, i realized it called for custard and canned pineapple. I had already cut up my pineapple and simmered it in a simple syrup for about 10 minutes, so the “canned” part was satisfied, but i am not a big fan of custard, and the tart shell was only lightly cooked. I decided to switch my approach, and make it a baked tart. I chopped up 1/2 c almonds and pecans to a powder, and then whipped in butter, eggs, and icing sugar to create a sort of Frangipani .

I pulled the dough out of the fridge, and attempted to roll it out. (Julia warns that is a sticky dough–i have never worked with stickier!) After a few failed attempts using a pastry sheet, i switched to rolling it out between 2 layers of plastic wrap and managed to line my tart shell. It was then placed in the freezer for a 1/2 hr to chill before being baked (empty).
After baking the tart shell, and letting it cool I spread on a layer of the frangipani, and a couple layers of pineapple. I then set it aside.

Onto the fennel salad:
1 bulb of fennel, most of a red onion, 4 oranges (segmented, membrane removed) a cucumber and 2 endives were all julienned and tossed together with salt, pepper, the juice of the oranges, some olive oil, and herb vinegar.

The coq au vin was finished simmering and needed to be strained. The liquid was put into a clean pot and the meat and veg remained in the casserole.
With a 1/2 hour to go on the coq au vin, the potatoes  were seasoned, given a light coat of oil,  and put in a 450 oven .

We simmered the coq au vin liquid until it reduced by about half and then used a Beurre manié to thicken the sauce. It required no seasoning! (Julia Child suggest that the salt pork be simmered before being cooked, and i think if we were to do it again we would follow her advise and use unsalted butter –the sauce was perfect–but easily could have been too salty. Next time I’d like more control)

Finally all the meat and veg are returned to the sauce for a final, gentle and brief simmer before serving. 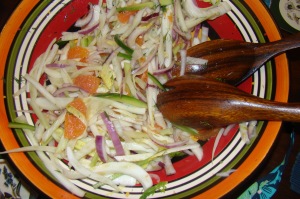 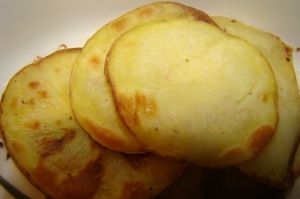 The pineapple was cut into the shape of stars before being layered on the tart, so we cut out our caramel to match. served with espresso, and vanilla ice cream.
All in all, the meal was pretty great!

“YUM” this recipe on Yummly